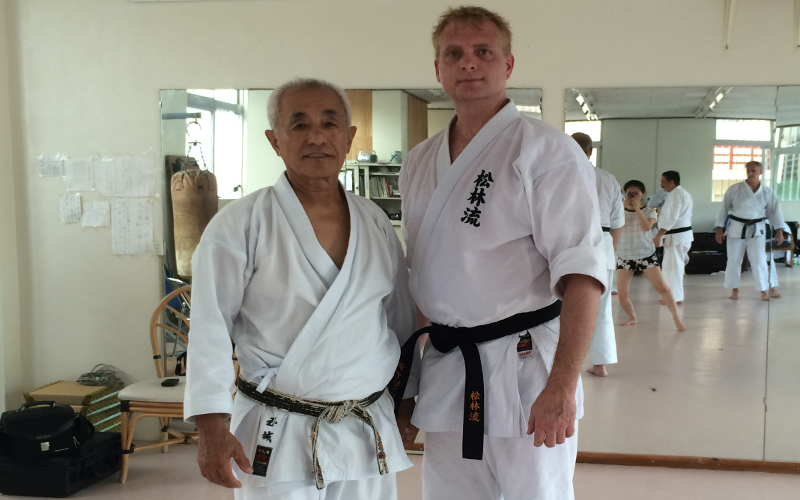 I have been training in the martial arts for over twenty years, and it is indeed one of my passions in life. I have a yon dan (4th degree black belt) in Matsubayahsi Shorin Ryu (member of Shorin Ryu Karatedo International and the American Shorin Ryu Karate Association) and a sho dan (first degree black belt) in Shotokan, and I have trained several years on Shaolin Kempo (no rank). Recently, I have had the honor to train with Sensei Rick Kaufman at the Traditional Martial Arts Centers and Sensei Jerry Figgiani at East Coast Black Belt Academy, maintaining an ongoing friendship and training relationship. I am the founder and head instructor of the Shorin Ryu Karate Academy in Grove City, PA.

As hokey as it may sound, my inspiration was, yes, Bruce Lee. When I was a child in the 1970s, Bruce Lee was wildly popular in America, and I was fascinated by his films, and I loved watching Black Belt Theater on Saturday afternoons. Those classic Hong Kong Kung-fu movies were awesome, and I wanted to learn how to do all that.

It wasn’t until I was in middle school in Saudi Arabia that I got my first introduction to formal martial arts training. There was a Thai man who worked in the recreation center, and he started a kids class teaching the basics of Thai boxing. I learned a front kick, roundhouse kick, and some basic elbow strikes. Well, the spark was ignited, and I was hooked.

My family moved around a lot, and it wasn’t until my tenth-grade year in Tennessee that I was able to start training again. I found a really good, small Tae Kwon Do school, run by this little, young Korean man named Song Brown who looked a lot like Bruce Lee, especially when he put on his big sun glasses. His school was located in aloft above a Gold’s Gym, and I remember having to walk past all these muscle heads grunting and flexing in front of mirrors. Climbing the steps up to Song’s do jang (the Korean term for dojo or training space) brought me into a totally different world from the gym below. There were strange weapons, Korean flags, flags for the various Tae Kwon Do systems, different colored belts, various types of punching and kicking bags, and of course, little Master Song kicking, punching, twirling, and whirling like an Asian cyclone. He was small, but, dang!, was he fast and powerful.

My family moved again, this time to Ohio, and I continued training in Tae Kwon Do for my Junior and part of my Senior year in high school. I then went to The Ohio State University, and I decided to train in a different style. I found the OSU Karate Club, and I liked what I saw: simple, no-nonsense, straight-forward, kick-your-butt karate. I was sold. I trained with them through my undergraduate and graduate work at OSU. I learned that this karate was a very traditional Okinawan style called Matsubayashi Shorin-Ryu, and after five years of hard training, three to four days a week for two hours each session, I earned my Sho Dan (first degree black belt).

I was informed that now, it was time to learn. Excuse me? After five years of hard training, now I start learning? Yeppers! The Eastern mind is delightfully different than the Western mind. What I thought was a goal or end point was, in fact, just the beginning point. Once I entered the black belt class, a whole other world of martial arts wonder opened up. No, we weren’t learning to levitate or fly through the tree tops (although that would be cool); we learned how to break the rules we learned for the past five years and to become even more efficient and deadly. The techniques become more exotic but also more beautiful, and we learned a lot about power, strength, and body dynamics. Amazing stuff. I continued to train with them, and by the time I finished my PhD, I had achieved the rank of San Dan (third degree black belt).

Alas, I would move again, this time to New York to pursue my academic career at the New York Institute of Technology. Life was taking me in different directions, and I found it difficult to continue training. I found a Shorin-Ryu school and trained there for a year. I then moved to a different city on Long Island and could no longer train there. I found a Shotokan school in the new town to which I moved, and I checked it out. The students were great, and the sensei (teacher) was awesome. Sensei Avi. He was a Shotokan champion from Israel, and we immediately hit it off. What made me want to train there was that during a trial class, one of his black belts kept nailing me in the ribs with a really fast and strong reverse punch (Shotokan practitioners are known for their reverse punches), and I never saw it coming and could never block it in time. Even though he busted my ribs up pretty good (I still have rib issues to this day), I had to learn how to do that punch. So I joined. I liked Sensei Avi’s hard-nosed yet humorous personality, and the training was rigorous. I trained there for about three years and earned a Sho Dan (first degree black belt) in Shotokan.

But, life would take me to another town on Long Island, and once I moved I could no longer train with Sensei Avi. I looked around in my new town and did not find a suitable place to train, and so several years went by, and I was not training. Eventually, I decided it was time to get out of the house and start training again. A new school opened up around the corner from my house, and the sign said Shaolin Self Defense. What’s that, I wondered. A few more months went by, and then I had the opportunity to teach a semester in Nanjing. I took my gi (uniform) and hoped that maybe I could do some Kung-fu training there. Much to my surprise, there were no Kung-fu clubs on campus, but there were Tae Kwon Do and Karate clubs. Strange. Anyway, I went to the Karate club, and I was met with much respect and interest. It turned out that since I outranked the head teacher of their club, they wanted me to teach classes. I tried to explain that I wanted to learn from them, but they wouldn’t have it. Again, interesting cultural differences. The Asian mindset would not consider having a higher ranking practitioner as a student to a lower ranking practitioner, even though I wanted to learn from them. So, I agreed, and once or twice a week, I taught their karate classes. It was wonderful. I helped them develop their various skills, especially in basic self-defense.

When I returned from China, I decided it was time for me to do some formal training again, and I wanted to branch out into different styles and systems. So, on my way home from campus one day, I stopped by the Shaolin Kempo school around the corner from my house, and I immediately knew this was a good place to train. The senseis were knowledgeable, approachable, and sensible. No hard sells, no contracts, no nonsense. I learned that the system is a form of Kempo from a master in Hawaii and that it brings together elements of Karate, Kung-fu, grappling, and MMA (mixed martial arts). Nice. I trained with them for about four years, learned some interesting things and made excellent friends.

During this training, I discovered Iain Abernethy’s practical karate website, and my love for my traditional karate roots were rekindled. I have always been interested in practical bunkai (the application of kata movements to real self-defense situations), and Abernethy’s work was a real eye-opener. I then discovered that practical bunkai is the focus of practitioners who belong to Shorin Ryu Karatedo International, and now I’m training with such folks. A whole new world is now open, and I’m bringing together all of my various training elements within practical bunkai, and I’m even developing my own curriculum. Who knows, maybe I’ll have a dojo and teach some day. Time will tell.

Teaching a pad drill to students at GCC

Bassai Dai and a few Bunkai